7 days without laughter makes one weak

(Article written by Jane Smith and published in Magascene on 21st July 2014) I recently heard about Laughter Yoga and out of curiosity and a desire to see how it would make me feel, I went along to a couple of sessions locally in Loughton. The sessions are run by Jennifer Johnson who, as well as being a trained Laughter Leader, is a Personal Change and Emotional Intelligence Coach. I knew I would be in safe hands.

You will no doubt be familiar with the expression ‘laughter is the best medicine’. But what you may not know is that the mind cannot differentiate between real and pretend laughter—the physiological and psychological benefits are the same. Babies and small children have a natural ability to laugh a lot—a joyful ‘in the moment’ laugh that does not use the intellectual side of the brain. It is said that babies laugh around 400 times a day. But, as we are socialised (and no doubt condemned for laughing at inappropriate moments) this is down to just 14 times a day by the time we reach adulthood. 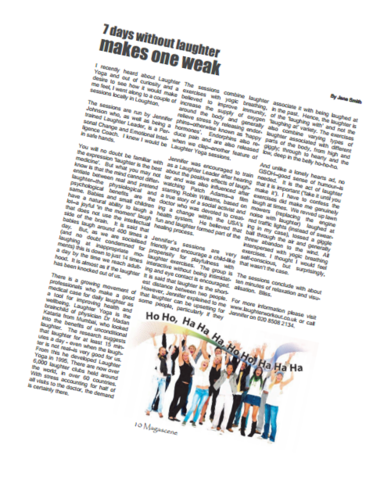 It is almost as if the laughter has been knocked out of us.

There is a growing movement of professionals who make a good medical case for daily laughter as a tool for improving health and wellbeing. Laughter Yoga is the brainchild of physician Dr Madan Kataria from Mumbai, who looked into the benefits of unconditional laughter. The research suggests that laughter for at least 15 minutes a day – even when the laughter is not real—is very good for us. From this he developed Laughter Yoga in 1995. There are now over 6,000 laughter clubs held around the world, in over 60 countries. With stress accounting for half of all visits to the doctor, the demand is certainly there. The sessions combine laughter exercises with yogic breathing, believed to improve immunity, increase the supply of oxygen around the body and generally relieve stress by releasing endorphins— otherwise known as ‘happy hormones’. Endorphins also reduce pain and are also released when we clap—another feature of Laughter Yoga sessions.

Jennifer was encouraged to train as a Laughter Leader after hearing about the positive effects of laughter and was also influenced after watching Patch Adams—a film starring Robin Williams, based on a true story of a social activist and doctor who was devoted to creating a change within the USA’s health system. He believed that fun and laughter formed part of the healing process.

Jennifer’s sessions are very friendly and encourage a child-like propensity for playfulness with laughter exercises. The group is interactive without being intimidating and eye contact is encouraged. It is said that laughter is the shortest distance between two people. However, Jennifer explained to me that laughter can be upsetting for some people, particularly if they associate it with being laughed at in the past. Hence, the laughter is of the ‘laughing with’ and not the ‘laughing at’ variety. The exercises also combine varying types of laughter associated with different parts of the body, from high and giggly; through to hearty and the low, deep in the belly ho-ho-ho.

And unlike a lonely hearts ad, no GSOH—good sense of humour—is needed. It is the act of laughter that it is important (‘fake it until you make it’). I have to confess the exercises did make me genuinely laugh at times. We revved up lawn mowers (replacing the engine noise with laughter) laughed at red traffic lights (instead of swearing in my case), tossed a giggle ball through the air and generally threw abandon to the wind. All interspersed with yogic breathing exercises. I thought I would feel self-conscious, but surprisingly, that wasn’t the case.

The sessions conclude with about ten minutes of relaxation and visualisation. Bliss.

This article was first published in Magascene in Spring 2014.